Headworks is the initial process at Green Valley Water (GVW) reclamation facility. It is a physical process that consists of an influent screen, compactor, and grit chamber, which removes inorganic solids and grit from the Raw Influent. The screenings and grit are removed to protect the reclamation facility equipment and maintain proper treatment of the biological nutrient removal (BNR) and biological phosphorus removal (Bio P) processes. If the removal does not occur, the grit will damage pumps and build up in the basins throughout the plant, which changes hydraulic and organic detention times. The influent screen removes most non-flushable items from the raw influence, including rags, “flushable” wipes, feminine hygiene products, toys, and more extensive materials from houses, buildings, and maintenance holes. The Influent then flows into the Grit Chamber, where the majority of the settable Inorganics are removed. The Grit Chamber is a circular basin with a rotating agitator that forces the grit against the outside walls. This heavier grit is forced to the outer walls of the grit chamber by centrifugal force and settles to the bottom of the chamber. The grit is flushed with plant process water which separates the organic material from the grit before discharging.

The Bardenpho process is a biological process that provides conditions for both nitrogen and phosphorus removal. This system consists of five distinct reactors, which are respectively: anaerobic reactor, first anoxic reactor, first aerobic reactor, second anoxic reactor, and second aerobic reactor.GVW uses the Bardenpho step for its Activated Sludge Process (ASP). The treatment begins as a biological process called BNR and Bio P. The process consists of zones or basins. These basins, in order, are Anaerobic, First Anoxic, Aeration, Second Anoxic, and Reaeration. The purpose of activated sludge is to remove nutrients and organics from the water.

The anaerobic zone is first in the process because it requires an environment free of Dissolved Oxygen (D.O.) and available molecularly combined oxygen such as nitrite and nitrate. A mixture of plant influent and Return Activated Sludge (RAS), which becomes Mixed Liquor Suspended Solids (MLSS), flows into the head of the zone. The RAS contains microorganisms (bugs), some of which are Phosphorus Accumulating Organisms (PAO’s) that are starved of Volatile Fatty Acids (VFA’s). The Influent is full of VFA’s, so the PAO’s go on a feeding frenzy. When they start consuming the VFA’s, they require oxygen to stay active. However, there is none available, so they strip the oxygen from Phosphate, which causes phosphorus to go into solution. The PAO’s have now released their phosphorus reserve and will want to reobtain it later in the treatment process.

The first anoxic basin is designed to remove nitrate from the water in an environment free of D.O. The Influence water does not contain any nitrates, but it contains ammonia (NH3) and Ammonium (NH4+). The ammonium is converted into nitrates in the aeration basins and recycled from there to the first anoxic. With the first anoxic getting fed the BOD that passed through the anaerobic basin, the bugs start to consume all the new “food.” While the bugs are active, they need oxygen to maintain their activity; however, there is no D.O. in the basin, consuming the oxygen attached to the nitrate molecule. After the oxygen is removed from nitrate, nitrogen gas is released into the atmosphere, known as Denitrification.

The aeration basin is where the cleaning of the water begins, and the removal of ammonium occurs. Ammonium is removed because it is toxic to aquatic life. The water is cleaned to achieve a Turbidity of less than 2.0 NTU to reach GVW’s A+ Water Effluent requirements. The MLSS going over the first anoxic basin into the aeration basin weir now contains BOD, bugs that require oxygen, phosphorus, ammonia, ammonium, and little to no nitrate. Green Valley Water uses high-efficiency turbo blowers to provide air to the basin and maintain a D.O. of 1.75mg/L to 2.5mg/L, depending on the season.  Nitrifying bacteria cause a biochemical reaction that converts ammonium and oxygen into nitrite and water. The nitrite is converted into nitrate. The creation of nitrate causes potential effluent issues, so the MLSS must be returned to the first anoxic basin to remove them safely. Ammonia and ammonium always maintain a ratio that is temperature and pH-dependent. With the ammonium turning into nitrite, the ammonia converts to ammonium. Thus, entirely getting rid of all ammonium/ammonia known as Nitrification.

Nitrifying bacteria are slow growers, so in order to grow and maintain them, GVW operates the ASP at a Sludge Retention Time (SRT). If the SRT is too old, the PAO’s will not perform their jobs effectively because they will lose the battle to Glycogen Accumulating Organisms (GAO’s), which will cause too much Phosphorus in the effluent. An old SRT can also cause turbidity to rise. If the SRT is too young, the nitrifying bacteria will not thrive, potentially hampering the ability to treat the water to Class A+ standards. The BOD, both settable and non-settable, is consumed by all the other bacteria. The bacteria are consumed by the more prominent (typically older) bugs. These more giant bugs form flocs and settle, leaving behind clear water. The SRT determines which type of larger and smaller bugs are in the ASP.

With there being readily available oxygen in the aeration basin, luxury Phosphorus uptake happens with the PAO’s. The PAO’s were starving for Phosphorus after releasing it in the anaerobic basin. Since they have entered a “starvation” mode, they will take back the Phosphorus they released and extra Phosphorus that came in with the Plant Influent. The PAO’s settle as part of the flocculent in the clarifiers. The Phosphorus gets removed in the Waste Activated Sludge (WAS).

The MLSS goes from the reaeration basin to the clarifiers. Any nitrate left in the flow when the MLSS reaches the clarifiers could denitrify, causing solids to rise to the surface and go over the weirs. To prevent solids from rising, the air is added to help maintain a D.O. of 0.5mg/L before traveling to the clarifiers. 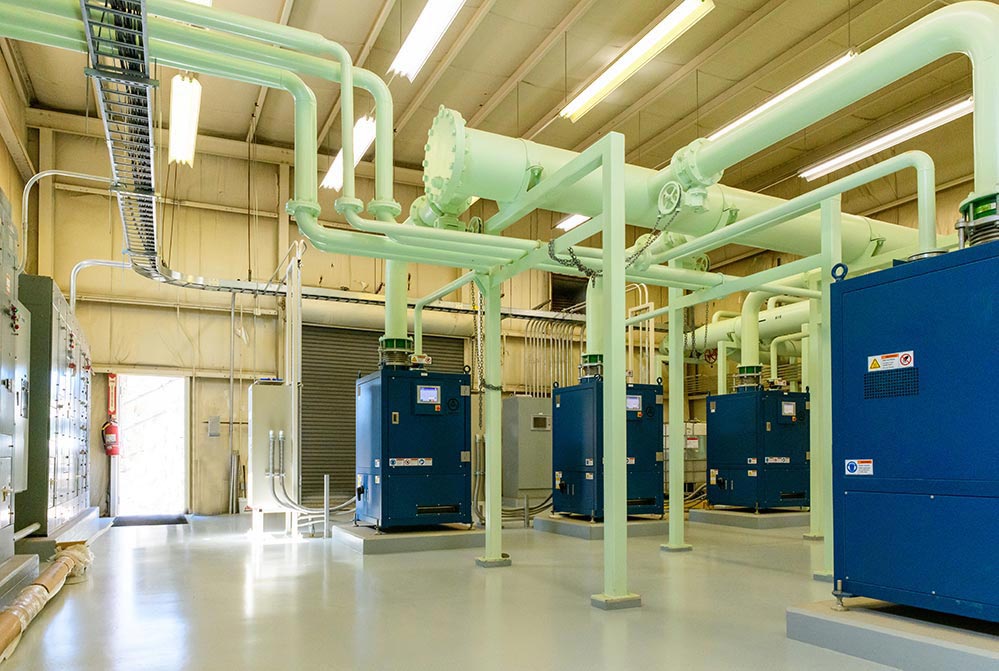 The MLSS leaving the Bardenpho process travels to the secondary clarifiers. The clarifiers give enough time to allow the bugs to settle and leave behind clear water. The clear water flows over the weirs and heads to the filtration process. The settled bugs are pulled from the bottom using hydraulics and go to the RAS pump station. The majority of the bugs are returned to the head of the Bardenpho process and mixed with the Influent. This waste is called WAS, and the ASP SRT determines the quantity of WAS.

GVW has three Membrane Disc Filters. The water leaving the clarifiers flows to the Disc Filters, where larger particles are removed. These captured particles flow to the Waste Back Wash (WBW) station and are pumped to the head of the Bardenpho process, are treated again. The clean water then passes through the heads of the filter to the disinfection process.

Disinfection is the final treatment process. GVW uses ultraviolet disinfection to create Class A+ water. The water flows through a series of tubes surrounded by U.V. bulbs. The rays penetrate the transparent material of the tubes and pass through the water, killing the bacteria. The Green Valley Water has an E.coli of zero, and classified as Class A+ Reclaimed Water, and deemed safe for use.

GVW supports and contributes to water conservation by helping the Town of Payson use its Class A+ water effluent, which reduces the demand for Town water. Depending on the season and the weather, the effluent flows down the American Gulch or pumped to Green Valley Lake utilizing our Reuse Pump Station. There is also a pump station at Green Valley Lake (GVL) that sends the water from the lake to all the reuse sites. The reuse sites include Payson High School, Payson Golf Course, Woodland Meadows, Chaparral Pines, and The Rim Golf Club. Green Valley Park also uses the water out of GVL to water the entire park grounds. The operators at GVW maintain the level at GVL by monitoring all of the reuse sites and GVL.

The WAS is pumped from the RAS pump station before going to the belt press. The WAS comes at a concentration of 0.5% solids and comes off the belt at 15.5-17% solids (referred to as cake). It is achieved by adding polymer, which is a flocculation agent. The mixture flows onto a belt that folds the floc, causing it to dewater and form rows. It then goes to the pressure zone, which squeezes more water to push through the belts.

Before You Flush: Remember the Three P’s
Scroll to top

This site uses cookies. By continuing to browse the site, you are agreeing to our use of cookies.